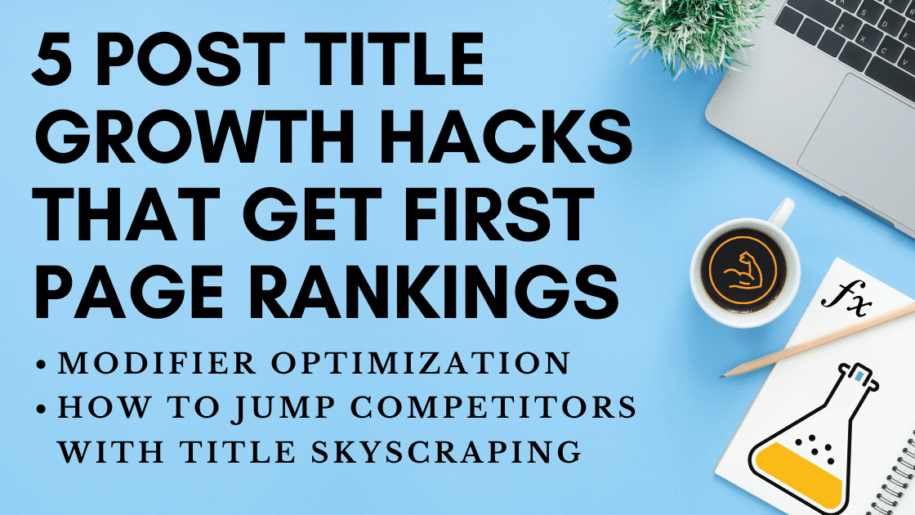 Here are five post title growth hacks that will increase the click through rate of your titles and push your posts to the top of Google.

Most titles over 60 characters are going to get cut off in the Google results. For your title to be effective, you will want it to be fully seen.

If you are trying to rank for SEO Tips, then that phrase should not be buried at the back end of your title.

Multiple studies have proven that people love to click on titles that lead with numbers.

They also click on odd numbers more than even numbers.

#4 Number Led Titles Should be 10 Higher than the Competition

The Google result on the first page with the highest number gets the most clicks. This is due to the psychological association with believing that the higher numbered title is going to be tied to a more comprehensive post.

You always want to go at least ten higher than the highest number on the first page. If the top title has 11 tips, then your title will have 21 tips.

#5 Identify the Proven Title Modifiers to Get Position One

A modifier is a keyword or number added to the title that is in addition to your target keyword phrase. When chosen and used correctly, title modifiers can significantly increase the CTR and make your post outrank everyone else.

To find the best proven title modifiers, you will need to do an analysis of the top 30 titles showing up in Google for the specific keyword phrase you are trying to rank for. I’ll show you how to do that after I explain the different modifiers.

There are three types of title modifiers.

Front End Modifier
This modifier comes before the target keyword phrase. For example, when I complete the keyword analysis of the top 30 titles for the phrase “seo tips,” Google tells me that the best front end modifier is “Most Important.”

If your title started out as:
50 SEO Tips

Then with the front end modifier it would become:
50 Most Important SEO Tips

Tail End Modifier
This one comes at the end of the title. The same title analysis for “seo tips” revealed that the best tail end modifier is “for beginners.”

After we add the tail end modifier, our title becomes:
50 Most Important SEO Tips for Beginners

Freshness Modifier
This modifier is simply including the current year. My title analysis for the phrase “seo tips” revealed that “2021” was used in 7 out of top 30 Google results. The best practice is to place the current year at the end of the title in parenthesis or brackets.

After the front end, tail end, and freshness modifiers are added to my example title we are left with:
50 Most Important SEO Tips for Beginners (2021)

Because the title is just as important as the content, I added the top 30 title analysis to RankIQ’s AI SEO Toolset.

With the data from RankIQ’s reports, you’ll be able to craft top-notch titles from proven words, which deliver the highest click through rates. Just by going back and optimizing the titles of your old posts, you can quickly increase your rankings and traffic.

Whether you do your analysis by hand or use RankIQ’s AI SEO Toolset, this is a step that you can not skip. A perfectly optimized title can be the difference between ranking number eight or number one in Google. Just in case you don’t already know, the #1 ranking gets 10 times more traffic than position #8.

Brandon is the founder and CEO of RankIQ. He also hosts the most downloaded blogging podcast on Apple (The Blogging Millionaire). His personal blogs get over 5 million monthly visitors.